Engagement rings: an in-depth guide to diamond shapes (and celebrities who wear them) - Queensland Brides 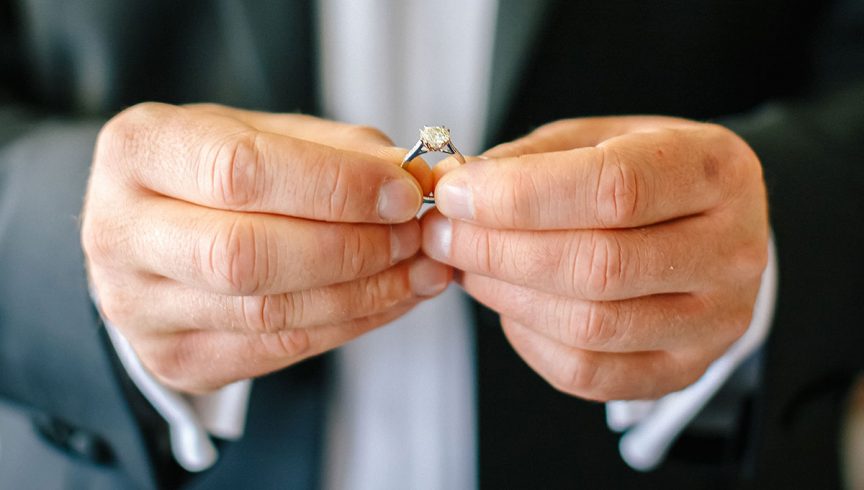 Are you getting lost in the glitter of figuring out your favourite diamond shape for an engagement ring to adore for eternity? Turn to our in-depth guide for the ultimate low-down on the most popular shapes – plus, we even tell you the celebrities who wear them. 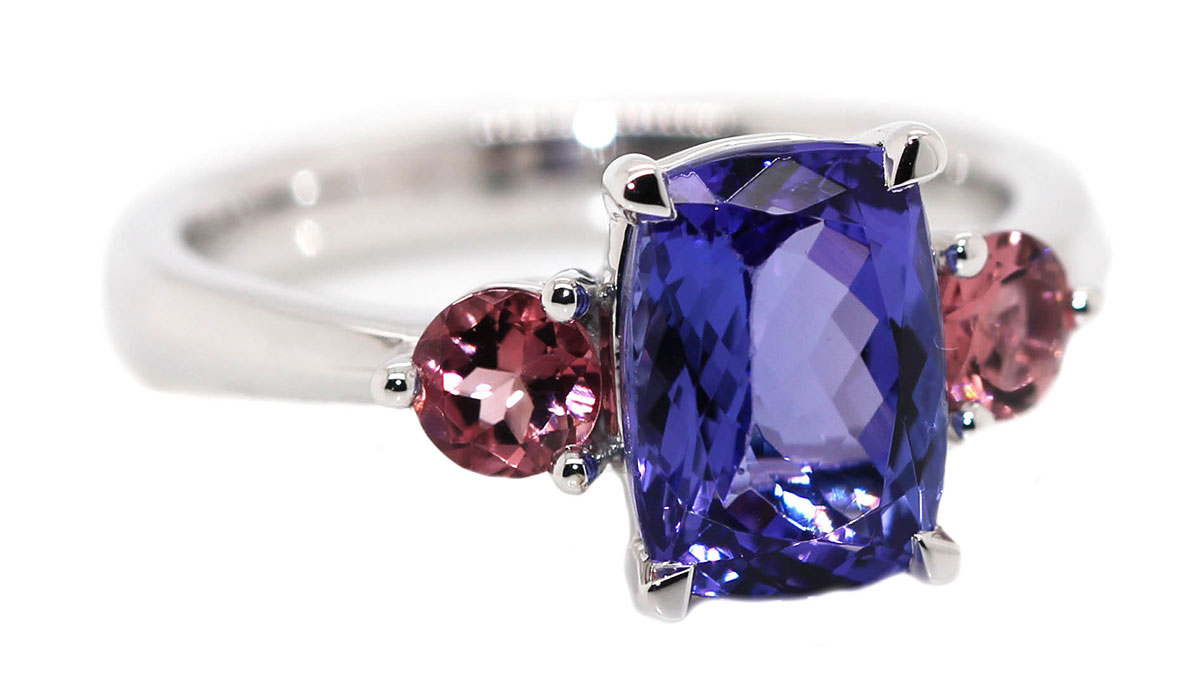 The sleek, bold lines of the emerald cut were a firm favourite during the art deco era and resonate with modern A-listers, too. This rectangular shape looks especially stunning on brides with long, slender fingers, packs a punch as a solitaire, or carries a more vintage feel when surrounded by other stones. Good to note: the emerald cut has less facets (faces) than a round stone and tends to show imperfections, so work with a trusted jeweller to track down a stellar stone.

WHO WEARS IT? Look to the blinding beauty Alex Rodriguez chose for Jennifer Lopez, the 18-carat whopper worn by Beyoncé, or Amal Clooney’s emerald-cut sparkler from George. Old Hollywood may have helped inspire the modern celebrity infatuation: avid jewellery collector Elizabeth Taylor scored a 29.4-carat, emerald-cut diamond from film producer Mike Todd (she reportedly called it her “ice skating rink”) as part of an impressive collection of engagement bling. Actress and style icon Grace Kelly also sported a 10.48-carat beauty in this style, designed by Cartier. Fun fact: it was Ms Kelly’s second engagement ring from Prince Rainier III of Monaco, the first being an eternity band of rubies and diamonds.

The Classic: Round Brilliant 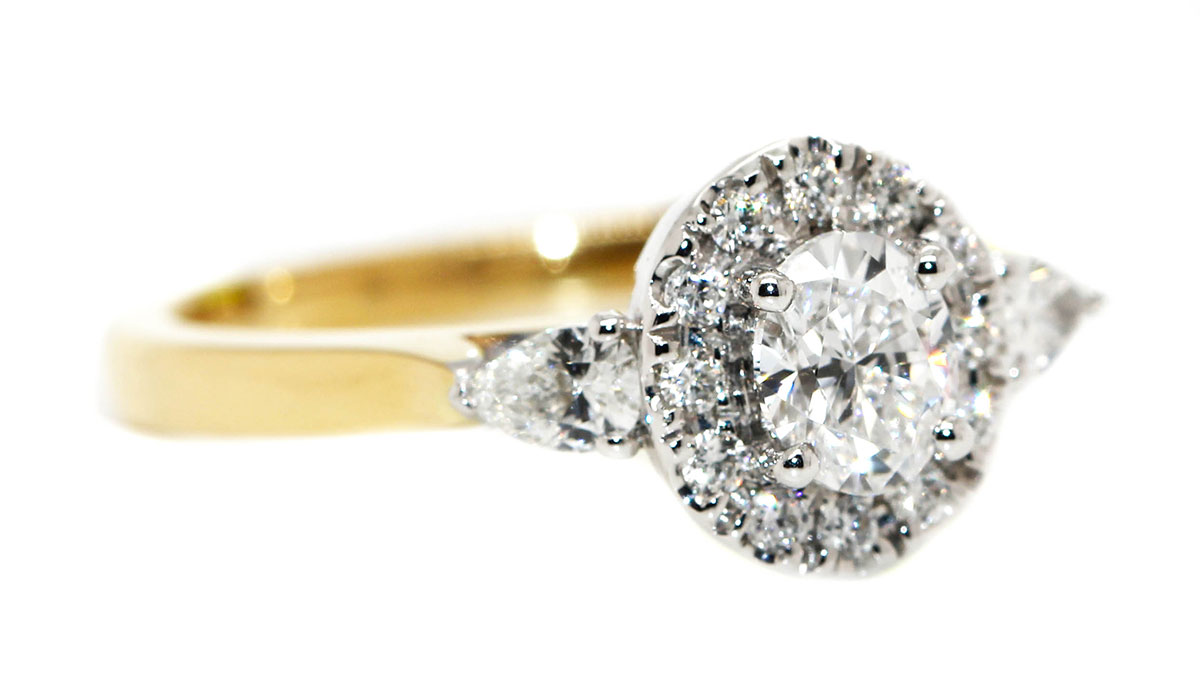 A classic choice with plenty of fire and sparkle, the versatile round cut suits almost every style and hand. Compact yet dazzling (thanks to its ‘brilliant’ faceting), a round diamond looks amazing as a solitaire and echoes your ring’s circle-of-love significance. Add polish with a platinum setting, glitter with a diamond-encrusted pavé band, or a vintage twist with a halo of stones or an intricate setting.

WHO WEARS IT? If you’re looking for simple yet stunning, check out Miranda Kerr’s brilliant-cut bauble from Evan Spiegel, Emily Blunt’s timeless sparkle from John Krasinski, and Kate Upton’s mega-watt stone from Justin Verlander, which sits on a circle of diamonds for added shine. Natalie Portman’s bespoke engagement ring, created by ballerina-turned-jeweller Jamie Wolf, is anchored by an antique round diamond and smaller conflict-free stones. Emmy Rossum also has a noteworthy piece in her vintage round-cut diamond ring (circa Paris 1920) from Sam Esmail. 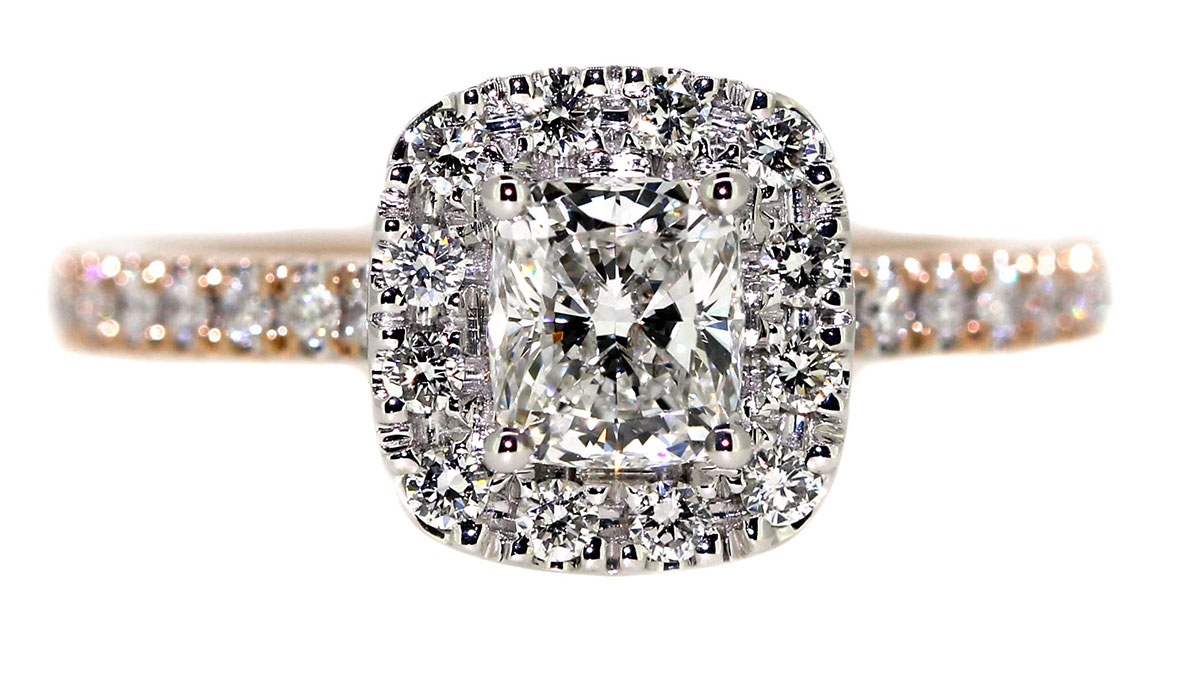 Another celeb favourite, the cushion cut is a softer version of the square/princess cut, with its rounded edges and extra faceting giving the stone a ‘pillowy’ look that catches the light. Perfect for anyone searching for an antique feel, this swoon-worthy style pairs perfectly with a halo of diamonds.

WHO WEARS IT? Nick Jonas reportedly shut down a Tiffany & Co store to choose a glorious cushion-cut diamond for Priyanka Chopra, while Meghan Markle’s three-stone classic from Prince Harry features this style as its centre. Interestingly, the royal ring was redesigned in 2019 by Harry and Meghan, who swapped the plain yellow gold band for a dainty micro-pavé setting. Chrissy Teigen also rocks a cushion-cut sparkler from John Legend, while Gabrielle Union-Wade rocks a million-dollar example in her solitaire from Dwyane Wade. And, while they may have called time on their marriage, Kim Kardashian’s engagement ice from Kanye West endures for what jewellery designer Lorraine Schwartz described as “the perfect cushion-cut diamond.” 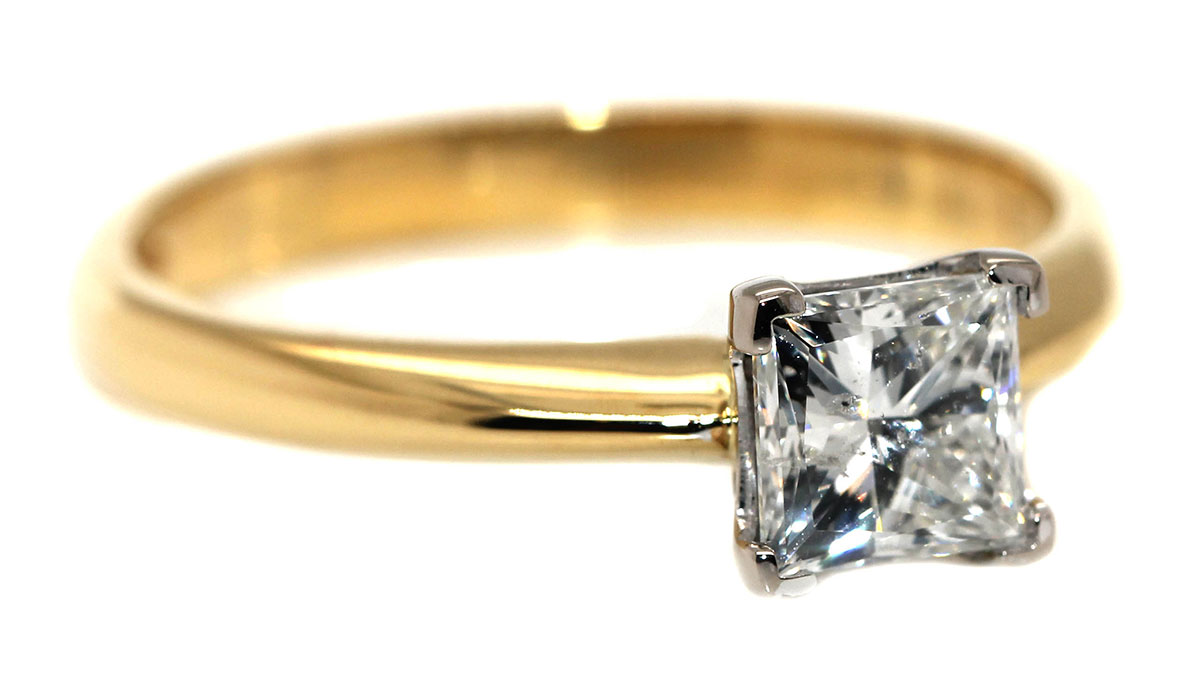 The clean shape of this glittering contemporary diamond shape works a treat in a range of settings. Usually appearing as a ‘brilliant’ cut for maximum twinkle, the graphic square is perfect for the no-fuss, modern-day princess.

WHO WEARS IT? It took a princess and a pear to make Emily Ratajkowski’s doublestone bling from Sebastian Bear-McClard, while Kate Bosworth’s modern classic from Michael Polish is thought to be the Asscher step-cut square style. 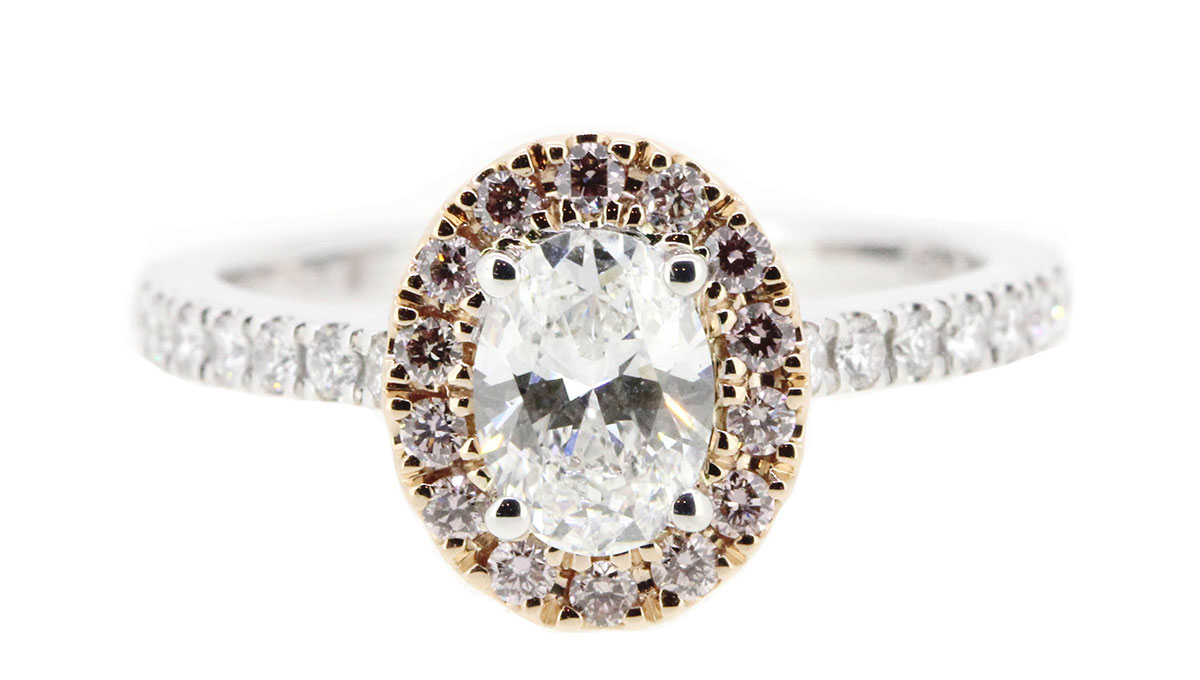 All hail the rise of the oval. A sophisticated choice that has become a celebrity fave in recent years, the oval cut is perfect for brides with long fingers who don’t vibe with the crisp corners of the emerald cut, or those looking for a more dramatic take on the classic round style.

WHO WEARS IT? Hailey Bieber made us fall in love with this shape all over again, with Justin Bieber reportedly saying he could “see Hailey’s face” when he spotted the 10-carat diamond. For another romantic take on the shape, check out Blake Lively’s 12-carat beauty from Ryan Reynolds, which stands out for its delicate pink hue and rose gold setting. Don’t want a diamond? Arguably the world’s most famous engagement ring is Princess Diana’s giant oval sapphire and diamond dream, which is now worn by Catherine, Duchess of Cambridge.

The distinctive teardrop-shaped pear cut is a cross between the round and the slender marquise styles. This is the perfect choice if you’re looking for something a bit different with a touch of old-world glamour.

WHO WEARS IT? Look to Sophie Turner’s showstopper from Joe Jonas, which is set on a double pavé band, Margot Robbie’s sparkler from Tom Ackerley, or Zoe Saldana’s sublime pear-shaped emerald. Victoria Beckham also has a whopping pear in her enviable collection, but the most eye-catching example of late comes from comedian Colin Jost, who chose a smoky-toned, pear-shaped diamond on an unconventional curved black band for Scarlett Johansson. 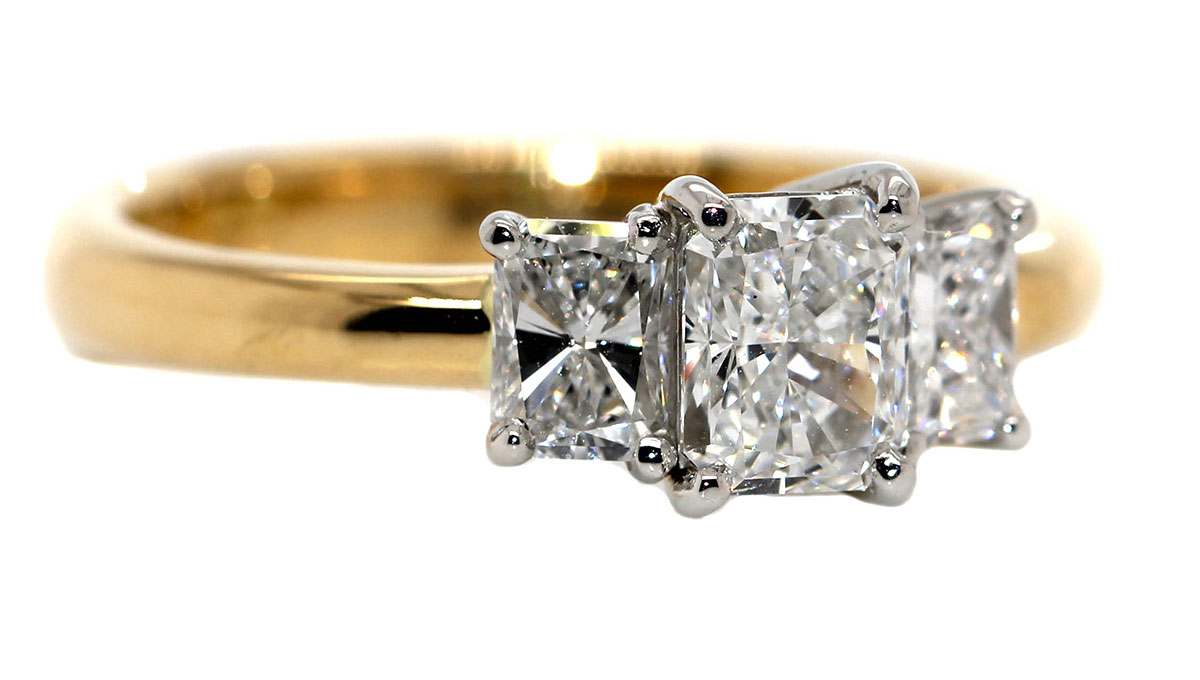 Working on your accents? Positioning side stones on the ‘shoulders’ of your ring can increase the real estate of your chosen sparkler or create a traditional look known as a trinity or trilogy: said to represent your past, present and future together. Aww. Consider sentimental stones, baguetteshaped diamonds or the four-sided trapezoid – just think of these little beauties as the bridesmaids to your centre stone.

The Price of Love

While the average cost of an engagement ring in Australia clocks in at around $5000-$7000, celebrity price tags go a little (okay: a lot) steeper. According to Jewellery Box UK, the priciest engagement ring of all time belonged to Grace Kelly. The emeraldcut Cartier beauty was thought to cost US$4,060,000 in 1956, and adjusted for inflation that’s just under US$40 million today! Jacqueline Kennedy Onassis scored second place for her 15-carat diamond from Aristotle Onassis at US$2.6 million (almost US$20 million once adjusted), with Mariah Carey’s 35-carat rock from her brief romance with James Packer coming in third at a reported cost of $13 million. No surprise that Jennifer Lopez makes the top 10 (twice!), as well as Beyoncé.

Feeling inspired? Check out the QB jewellery directory to find your perfect match!