The wisdom of travelling to the Solomon Islands - Queensland Brides 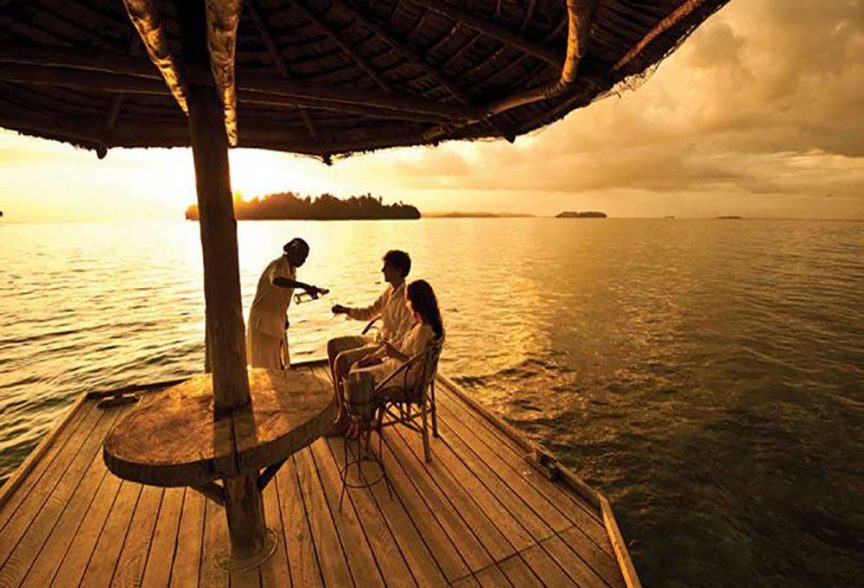 In 1568, Spanish explorer Mendaña named the Solomon Islands after the biblical King famous for his wisdom…  and mines of gold. Today, the name seems entirely fitting:  the islands are pure gold, and going here on your honeymoon would be very wise indeed.  But don’t go if you’re after long stretches of white-sand beaches and super-glam resorts where stilettos are de rigeur at the dinner table.

This is a place of simple pleasures and unspoiled natural beauty, where traditional culture is alive and extraordinary adventures are on offer. And the best part? The Solomon  Islands are still relatively undiscovered,  so there are no crowds. Prepped, excited and with shots (typhoid and hep A are recommended) and malaria tablets sorted, we took off from Brisbane for the surprisingly short – around three hours and 15 minutes – flight to the capital, Honiara.

Related articles: Honeymoon dreams are made of this and Top spots to honeymoon in Australia 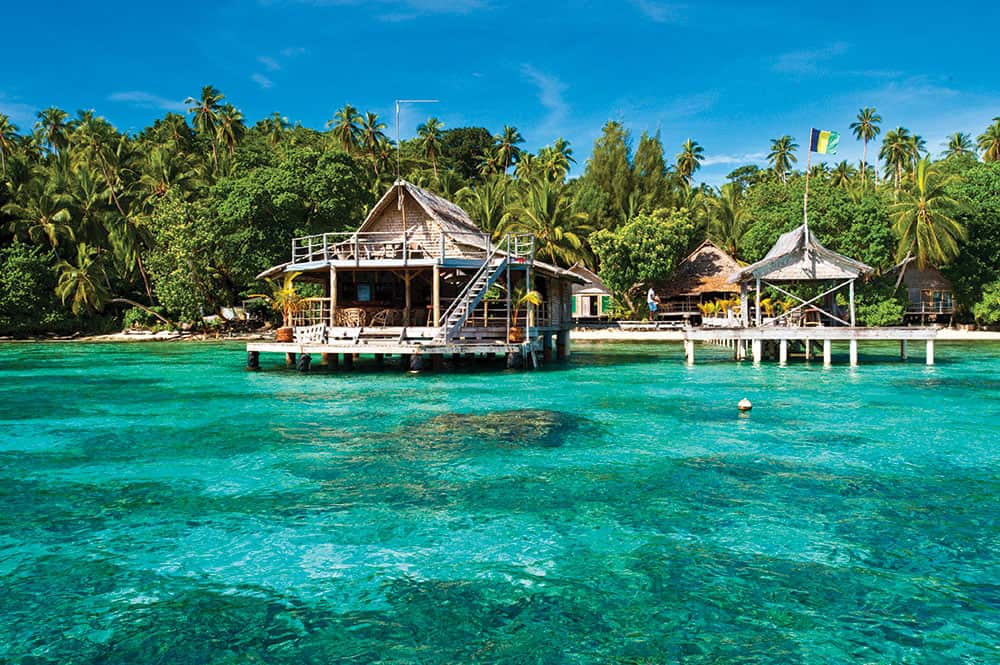 From there, it was straight on to an  eight-seater plane for the 25-minute hop to  Marau Sound, also in Guadalcanal Province.  Locals greeted us as we landed on the grass airfield, and then it was a picturesque  20-minute boat ride to our ultimate destination, Tavanipupu Private Island Resort ( tavanipupu.com ).

By all accounts, the most luxurious resort in the Solomons, this little patch of paradise was thrust into the spotlight in 2012, when the  Duke and Duchess of Cambridge stayed here during their tour of the Pacific. Excitingly,  my home for the next four days was to be none other than the ‘Royal Bungalow’ –   the very one that had housed Wills and  Kate. One was ever so chuffed. And ever so tickled to see the gold loo seat hanging in commemoration above the ‘Royal Throne’.

There are just 11 other bungalows on the island, all wooden and eminently Insta-worthy, with thatched roofs, vaulted ceilings and four-poster king beds swathed in practical and pretty mosquito nets that scream romance. Heck, rumour has it Prince George was actually conceived in the bed in my room. There’s no Wi-Fi, TV, air-con or drinkable tap water in any of the bungalows, but somehow it just doesn’t matter. Who wants to watch TV when your private porch with day bed, hammock and lagoon views beckons? The porch is also the spot for savouring a yummy breakfast and contemplating the day ahead: perhaps exploring the island by bike,  catching your supper on a fishing expedition, or heading off for a gourmet lunch on a private sandy beach, just the two of you. 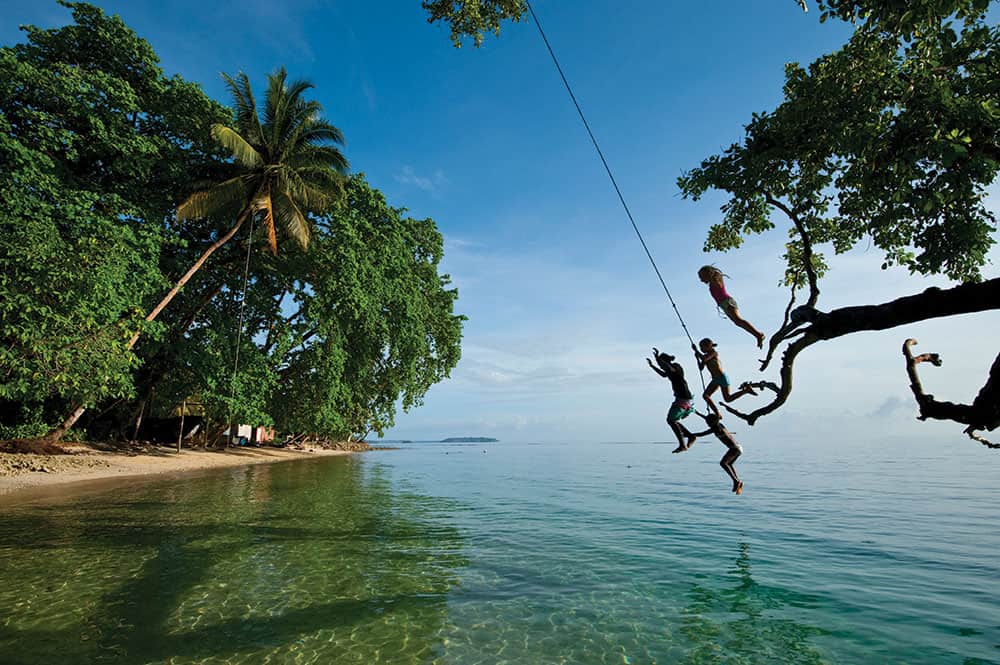 For us, highlights included reef snorkelling  – the waters are warm, the visibility endless and the marine life wondrous and abundant  (I found Nemo, and pretty much all his mates, on my first outing) – and a treatment in the overwater spa. The setting is rustic, but the view is gorgeous and the massage on offer top-notch, with a soothing soundtrack from nature courtesy of the waters lapping beneath.

Visiting the traditional village on an adjacent island is an absolute must. Located across a small channel, it takes about three wobbly minutes to get there by dugout canoe.  Kids race past in their own canoes, putting you to shame with their skill and speed. A tour of their humble, happy homes is fascinating and reveals their simple, basic way of life. They keep abreast of the weather and their neighbours here, but that’s about it. Being so remote and with no electricity, there’s no way to get the news, and they freely admit to having no idea what’s going on in the rest of the world. No wonder they seem so happy. Back at the resort, we’re made very happy by the meals (and the extremely potent cocktails) served in the tropical, open-air dining room. Romantic dinners on the distant jetty seem tailor-made for honeymooners,  but then, so does pretty much everything here. 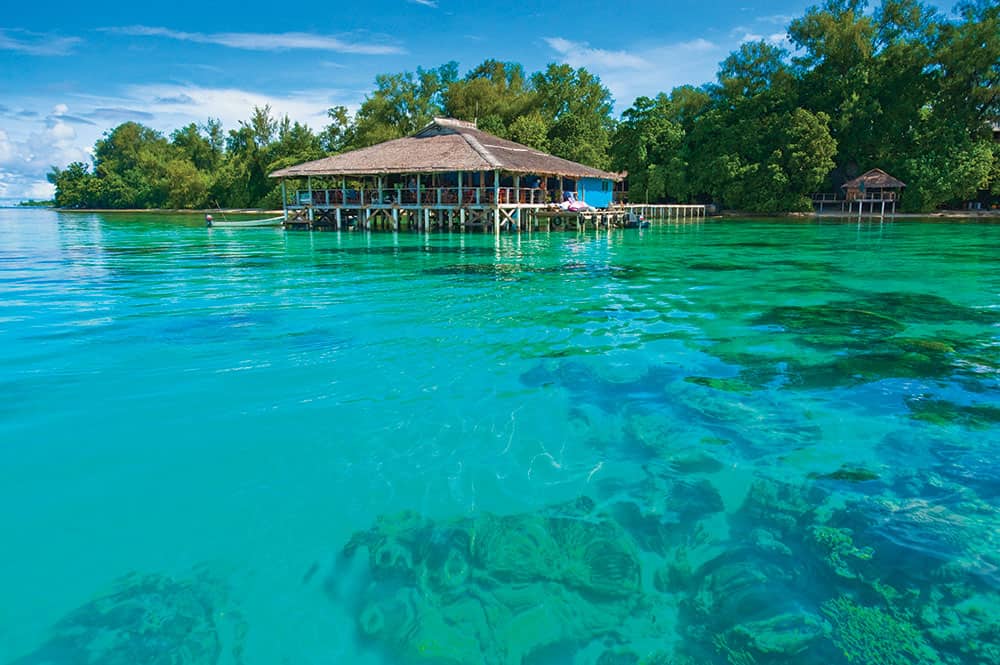 After four glorious days at Tavanipupu, it’s  back to Honiara, this time to board a flight to  Gizo in the Western Province. There’s a brief stopover in Munda en route, where our fabulous guide leisurely steps off the plane to deliver a care package – an esky full of treats  – to her recently widowed sister-in-law who lives nearby. The airline had absolutely no problem letting her off to deliver the esky –  or to pick it up on the return journey, this time filled with fresh local fish from a grateful relative. It’s just that sort of place: easy, relaxed and all about family. And long may it reign. Landing at Nusatupe Airport near Gizo,  we jump on a speedboat for the seven-minute trip to Sanbis Resort, an eco-friendly paradise located on another secluded island. Life is lived on or over the water here,  lending it a supremely chilled vibe. There are just six bungalows, all made from local materials and sitting right at the water’s edge, with views across Gizo Lagoon from their private decks. The decor is rustic and simple,  which is somehow even more conducive to relaxation.

Again, don’t expect any mod-cons such as air-con or a fridge: you won’t even find a power socket in the bungalow. To recharge your phone/iPad/camera battery, you head to the main part of Sanbis.  There’s a restaurant and games area on land,  but the real fulcrum of the resort is the overwater SB Bar, located at the end of the jetty, overlooking the lagoon. It’s a public bar,  so you can find yourself enjoying a drink with visitors who stop by in their boats, but generally it’s just enjoyed by guests. As well as powerpoints there’s Wi-Fi access, a big-screen  TV and a restaurant where you can enjoy a cracking lobster meal. The Solomons are possibly the best place on earth to eat lobster  – it’s plentiful, it’s cheap and it’s amazing.  At Sanbis, you can even put it on a pizza; the resort is famous for apparently having the only overwater woodfired pizza oven in the Pacific. 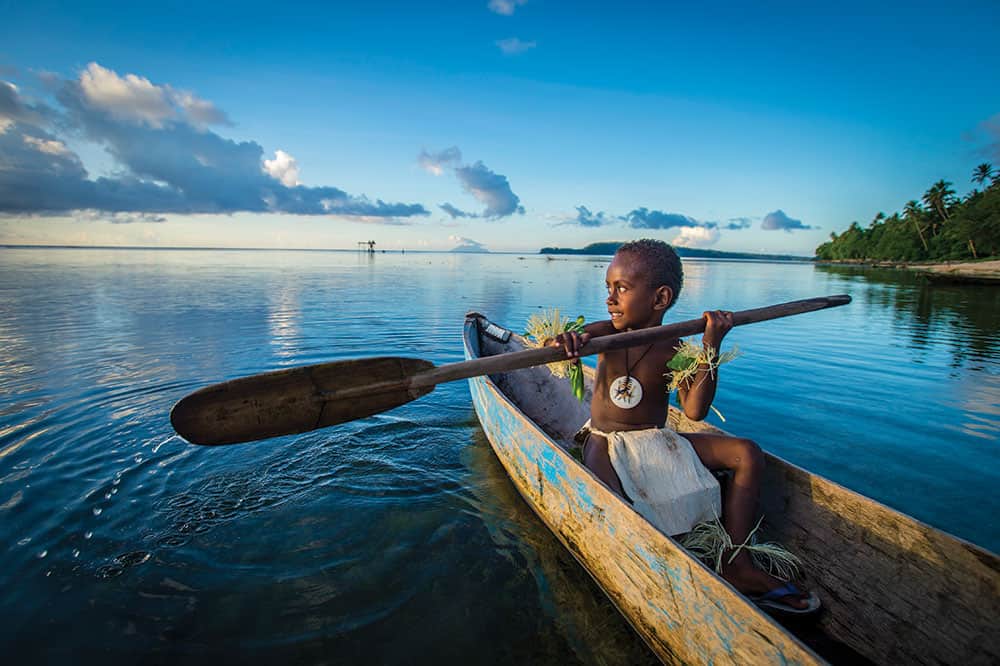 The SB Bar is also (literally) the stepping off point for some serious snorkelling. You can don mask and flippers and step down from the bar into warm waters filled with fish, coral and a WWII relic. But the ultimate snorkelling on our trip came courtesy of some island hopping.  Nearby Kennedy Island was a revelation.  So named because JFK (then Lieutenant  Kennedy) and his crew swam to it after their patrol torpedo boat was wrecked by a Japanese destroyer during WWII, the uninhabited island is teeny tiny, but the waters surrounding it are epic. Exotic, rainbow-coloured fish dart in and out of reefs festooned with colourful coral, starfish, shells and the odd coconut.  Other destinations just a quick boat  ride from Sanbis include Fatboys Resort, which boasts  an overwater restaurant that’s probably the  most famous place in the Solomons – lunch  here is an absolute must – and Gizo town  itself, where villagers from neighbouring  islands sell fresh produce at the waterfront  market every day, their teeth stained red  from chewing the betel nuts so beloved here. 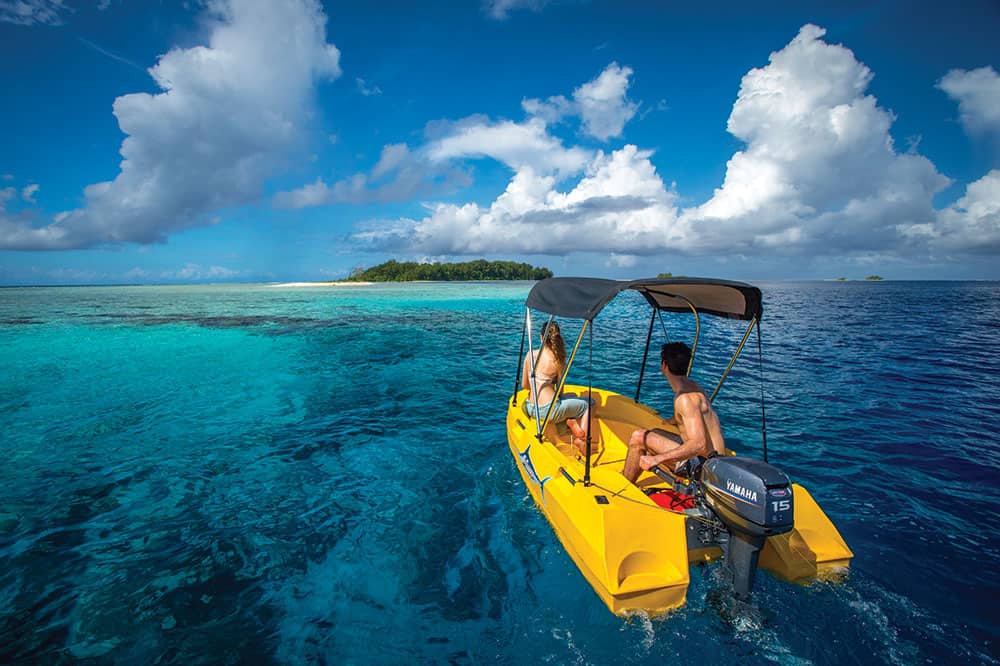 As the world wakes up to its charms, things are slowly changing in the Solomon Islands,  but in a lot of ways, not much has changed for many decades, which is part of its appeal. You forgive them pretty much anything because it’s so friendly, relaxed and utterly compelling.

Get to the Solomons soon, while they’re still,  to a great extent, unpredictable and untouched. And enjoy every blissful second.

Discover the Solomon Islands for yourself via our super helpful honeymoon directory.