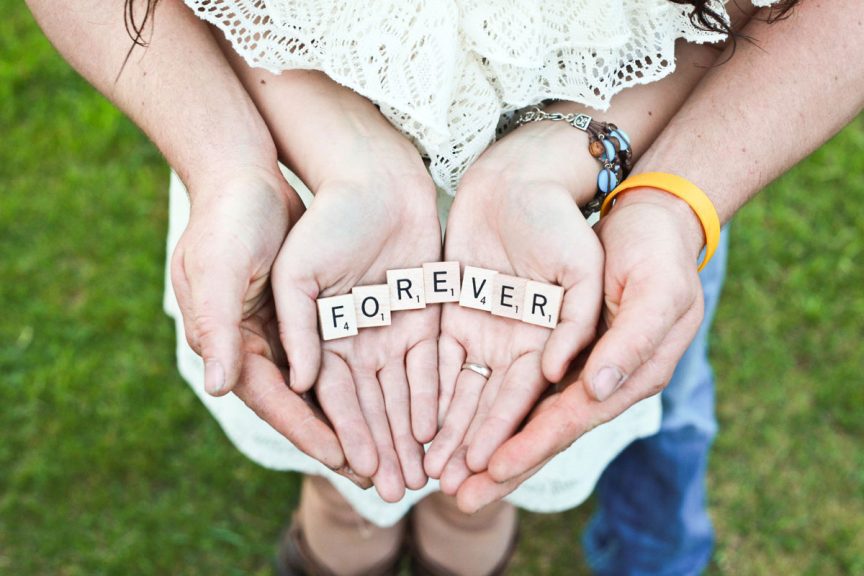 Like good wine, my marriage has improved every day since our wedding. The reason? My wife Stephanie and I have learned to apply the K.I.S.S method – Keep It Simple, Stupid – to our everyday lives. Whenever we start down that slippery slope toward a foolish argument (you know the type), we make a concerted effort to remember the straightforward rules that make our partnership so strong. Relationships are complex and they need to be nurtured in subtle ways. By following these four simple rules, you’ll be off to a great start.

Lying comes easily to all of us, and the more we lie, the more we get used to it. But shouldn’t your spouse be exempt from the fibs you tell your friends, family and colleagues on a regular basis? Most of the time, we lie out of a) convenience, b) falsely perceived necessity or c) just to see if we can get away with it. Since most lies are inconsequential, we don’t consider them harmful. (“Sweetheart, did you get a chance to call the plumber?” “Yes, I left a message.”) But we all know that lies have a way of snowballing. (“When did you call him?” “Yesterday. I called from the, er, mobile, when I, um, put the trash out.”) When that happens, a cloud of mistrust starts to hang over the relationship – and trust, once violated, isn’t always easy to win back. So why not make it easier for yourself? Did you go to a strip club for that stag night on Saturday and lie to your wife about it? Were you looking up sexy pictures of Brad Pitt on the web after your husband went to sleep? Did you stop for a pint with your mates on the way home from the office? Why not just say so? Telling the truth is much simpler, and it doesn’t involve having to remember lots of made-up facts. Lying to your spouse is acceptable in only three situations: to keep them in the dark when planning a surprise, to avoid hurting their feelings (“Do these pants make my hips look big?” “Of course not, darling. You’re like a toothpick.”) or to help them through pain or suffering (“Those cramps will go away soon, honey. Just focus on this foot massage. How about I do your shoulders next?”)

A promise is the most important thing you can give someone. The truth of this struck me one day when I was lying on the sofa watching a football match. Stephanie called from the bedroom, asking for my help with some task. “Be there in a minute!” I called – and of course, I didn’t budge for the next five. I was telling a bald-faced lie and acting like I didn’t know and didn’t care. After those few minutes, a voice in my head drowned out the match long enough to holler at me, “if you say you’re going to help her, do it! She assumes you’re going to keep your promise and you’re lying to her just because you don’t feel like getting your lazy rear end off the sofa.” When I forced myself to move, I discovered that it wasn’t such an effort after all – certainly not enough to warrant telling a lie just because it happened to be the easier choice. After that, I tried to practise following through on the things I told Stephanie I was going to do, and eventually, saying I was going to do something and then doing it became a pleasant habit. This may not sound like something you should have to work on, but for most people, it really is. Most of the promises we make are about small things – taking out the rubbish, making a phone call, hanging up a painting – and are therefore easy to keep. But laziness often stops us. Whenever you feel yourself letting a promise slip, force yourself to get off that sofa. You’ll feel better about yourself, and, more important, your partner will realise that your word is gold. Part of keeping promises is good communication; the backbone of any healthy relationship. I can’t keep a promise if I don’t know what’s being asked of me. Conversely, if I make a vague request, it’s harder for Stephanie to meet it. Earlier in our relationship, when she would ask me to fetch something for her – a bottle of nail polish, for instance – she’d regularly get frustrated with me for not doing it straight away, and I’d frequently become uptight with her for not giving me specific directions. The scene would go something like this. She’d politely ask if I could find her red nail polish and bring it downstairs. I’d watch just a bit more of the match. Then I’d go upstairs, only to be confronted by ten little bottles of nail polish, all of which looked more or less red, from which I’d invariably choose the wrong one. It would end in one big ball of shared exasperation. Finally, we talked about this issue and realised we were both being counterproductive and silly, reinforcing gender stereotypes and making no effort to break them. Now, when she needs something, she’ll say, “could you get my nail polish, darling? It’s the Estée Lauder one, bright red, right side of the bottom shelf in the bathroom cabinet, behind my curler and in front of my shower cap.” And I don’t wait for another minute of the match to elapse. I tell her I’d be happy to do her that favour – and then I keep my promise.

Arguments are a natural by-product of any two people living together. You can’t avoid them. But when you do argue, try to get some mutual value out of it. Productive arguing – as opposed to the simple act of trying to get the other person to admit they’re wrong – will help your relationship because you’ll both feel an argument was worthwhile once it’s over. There are four steps to productive arguing: Avoid having the same argument, in the same way, over and over. If a certain debate arises often and follows the same pattern of dialogue, neither of you is trying to see the other’s point of view. Try to use new words to make your point, and you might discover a new perspective on the issue as well. Listen actively. If you’re having an argument, don’t just wait until the other person is finished and then pounce to repeat your own view. Instead of letting the argument spiral out of control, try to slow things down. Stop to consider what your spouse is saying. Remind yourself that this is a discussion whose aim is to reach a common solution, not a dispute where the goal is simply to win. In the heat of an argument, it’s natural to feel the other person is wrong. Once you get past this, you’ll find arguments can actually help your relationship progress and evolve instead of creating frustration and the feeling of spinning your wheels. Respect the other person’s style. Some people need to yell, cry or fume during a healthy argument. Others wouldn’t raise their voices if you punched them in the nose. An argument isn’t about imposing your own style on the other person; it’s about two of you adapting to each other so a solution can be found more swiftly. Stick to what you’re arguing about. Arguments end faster when both parties resist the temptation to dredge up other grievances based solely on the fact that they’re angry and so want to air all their dirty laundry. Treat arguments like you would a school essay: stick to the point. Arguing with your husband about finances may somehow make you think about how annoying it is when he endlessly flips TV channels. Accusing him of not paying you enough attention may, for some reason, trigger his irritation that you always find a way to make the two of you late for dinners with his friends. Try to keep your words relevant and avoid empty rhetoric, juvenile insults or arbitrary shots at the other person’s family. Phrases such as “Would you just calm down?” or “Why are you getting hysterical about this?” only make things worse. Most important of all, when you’ve reached a point in the argument where you believe you might be wrong, don’t allow yourself to go any further. Squeeze those dreaded words, “I’m sorry,” out of your mouth and then give yourself a pat on the back for being a relatively mature human being. No one has ever died from apologising, but lots of relationships have suffered from two people being unwilling to apologise. If you’ve messed up, admit it. Most of us, even after we realise we’ve made a mistake, continue to defend our position out of sheer stubbornness or pride. What’s the point? In an ideal world, no one would ever say negative things on impulse, leave the toilet seat up or forget to call the plumber. But in reality, people make mistakes. Don’t be proud, become a bigger person and say you’re sorry. You’ll probably be surprised at how good it feels

Your partner is your friend, and you shouldn’t take friends for granted. Showing you value your partner’s friendship means doing several things on a regular basis: Expressing appreciation – and not only for the special things. Saying thank you on a day-to-day basis is more important than effusive thanks for exceptional acts or gifts. I don’t give my wife regular shoulder massages just because I know she likes them. She always tells me how much she appreciates it, which only makes me happier to do it. Acts of kindness should be received with as much appreciation the hundredth time as the first. Minding your pleases and thank yous. It’s easy to let simple good manners fade from a relationship over time. Make a pact not to let this happen. If you’re passing behind your spouse’s chair at dinner, “excuse me, sweetheart” works a lot better than, “shove over, big butt.” When you come home grumpy from a bad day at work, or the pipes have burst and you’ve got to pay an arm and a leg to have them fixed, do one of two things. Either convince yourself that it is just not worth being so aggravated over, or admit to your partner that you really need to have a rant and ask if they’d mind bearing the brunt of it. Your partner will probably be happy to oblige. It’s when you use them as a punching bag with no warning that you’re being unfair. Avoiding cruelty at all costs. Be aware of the personal traits or habits your partner is sensitive about and resist making fun of them, especially in moments of frustration. Expressing opinions is appropriate; taking potshots, just because it’s easy, is not. Stephanie and I have made a pact that I am not, under any circumstances, allowed to compare her to her mother during an argument, and in exchange she is at no time allowed to tease me about my sense of direction, which half the time gets me lost when I try to go to the corner store and back. An essential part of your role as a spouse is to make your partner feel they’re attractive, intelligent and industrious even when everyone else is making them feel otherwise. So think before you speak. In fact, now and again, tell your spouse how wonderful they are for no reason at all.

Relationships aren’t easy; that’s why the great ones are so special. Often we fool ourselves into thinking a good, healthy partnership is a result of lots of intricate rules, extensive explanations and elaborate analysis. In fact, the simpler you keep things, the better off you’ll be. Follow the four golden rules – don’t lie, keep your promises, argue productively and always, always play nice – and your relationship will never go anywhere but forward.